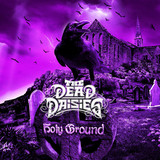 The Dead Daisies have gone from strength to strength since the release of their self-titled album in 2013. They have released four studio, one live and one covers albums to a growing army of fans worldwide and are praised by the global media in an era where Rock has been declared dead time and time again. The band’s DNA includes an amazing collective of players that includes John Corabi, Marco Mendoza, Richard Fortus, Dizzy Reed, Frank Ferrer, Darryl Jones, Tommy Clufetos, Charley Drayton and Jon Stevens amongst others. They’ve also shared the stage with some of the biggest names in Rock including Kiss, Guns N’ Roses, Scorpions, Aerosmith, Bad Company, Whitesnake, ZZ Top and the Hollywood Vampires. In 2019, The Dead Daisies introduced Glenn Hughes, also known as “The Voice Of Rock" into the band to begin a new era. Glenn's towering voice and unique bass playing style, joined guitarists Doug Aldrich, David Lowy and drummer Deen Castronovo to record the record 'Holy Ground', which was recorded by producer Ben Grosse at La Fabrique Studios in the south of France and released on January 22nd 2021. The band have just completed their Like No Other US, England and Wales 2021 tours and head to Europe in February 2022.