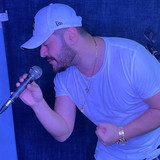 Singer/Songwriter Lenken has been working relentlessly hard creating new music. Hailing originally from Wellington, New Zealand Lenken has released his Debut Single YOUR LOVE in 2018. From there he'd continued to keep making Single after Single. His Newest Single COME THROUGH is a infusion of POP and R&B. Lenken has been channeling his love for R&B Music but incorporating commercial pop, EDM and soul music into his sound. His sound, lyrics and melodies are influenced by the likes of Usher, Craig David, Ne-Yo, Boyz II Men, New Edition, Justin Timberlake. His musical inspirations are Stevie Wonder, Stevie Wonder, Sam Cooke, Whitney Houston. His sound is diverse and caters to all music lovers. Lenken also has a passion for comedy and acting. check out his YouTube Channel to see some of his Comedy skits and popular covers he's sung. https://ffm.to/nrrvw0q