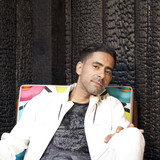 Known and recognized in the music industry since decades, his popularity is impressive. Success after success, DJ Maze accumulates gold discs and moves from ambitious project to ambitious project. On stage, Artists such as Marias Carey, The Black Eyed Peas and Usher ask him to perform opening acts in 17 000 spots venues ! The leitmotiv of DJ Maze : be a complete artist ! In 2017, DJ Maze recorded a new album, surrounded by Jamaican artists, at the Big Yard Studio (Kingston, Jamaica). At the end of March 2017, DJ Maze released a first single : “Wine Nikky Wine”, the song was played by several radio stations and was well ranked in the clubs charts. At the end of June 2017, “Wine Nikky Wine” cumulates more than 750 000 plays on Spotify, is very popular in Netherlands (#6 Spotify Top Viral in Netherlands) and has entered in the Top 50 most played tracks in clubs in France. At the beginning of July, DJ Maze releases a new single with pop-funk sounds “Say Me”, in collaboration with D Major.