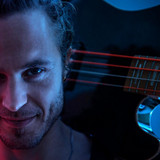 Matteo began his musical upbringing at 8 years old. Inspired by his father and mother, guitarist and vocalist actively performing during the 60's and early 70's era and by his relative classical pianist Ivo Pogorelich, he studied electric and double bass at the conservatory of his hometown (Terni, Italy). In 1996 Matteo discovered his ease and passion for the electric bass, which became his main instrument ever since, and in 2005 his talent was recognised by Irene Grandi's bass player Marco Caudai. Matteo moved to London in 2007 to expand his skills and keep looking for that sound. He shared stages with world known figures such as Roy Ayers, Martha and The Vandellas, Neville Staple, Linda Lewis, Eliza Doolittle, Roots Manuva, Curiosity Killed The Cat etc. Hanging at popular and underground London's jam sessions gave birth to a wide array of circumstances. Today some of his collaborations include: Afrik Bawantu, Faith I Branko, Asian Dub Foundation, Seeds of Creation, Full Attack Band, Tantz, Tony Dudu & Gumbe Jazz, The Boom Yeh, Gizelle Smith, Living Sounds, Ruby Goe, The Toasters and many others. With a very percussive approach to his instrument and his compositions, his music combines his love for funk and jazz with his experimental approach, leaving large room for grooves and flamboyant compositions. While his collaborations and his experience as a pro session musician bring everything to life with hip vibes and rumbling rhythms.