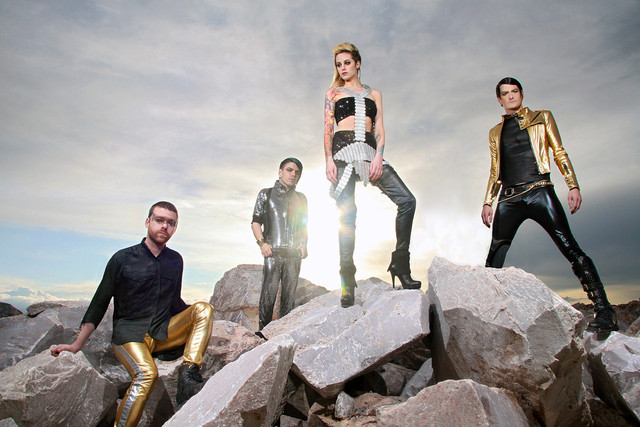 Although formed in sunny California during the early 2000s, Shiny Toy Guns' music flaunts a sleek, '80s-influenced combination of synth-pop and electro-clash. Founded in 2001 by bassist/keyboardist Jeremy Dawson and guitarist/vocalist Gregori Chad Petree -- both natives of central Oklahoma -- the band's lineup was fully realized with the addition of vocalist Carah Faye Charnow (who was brought aboard in 2004 to replace the departing Ursula Vari) and drummer Mikey Martin. After building a local following in California, Shiny Toy Guns made its debut in early 2005 with We Are Pilots; the album was then re-recorded and reissued later that year, albeit with a slightly different track list. Extensive touring and networking on various Internet websites continued to broaden the Guns' audience, and the group signed a contract to Universal Records in June 2006. That year also saw the third (and final) release of We Are Pilots, this time issued with the help of a major label. The album fared well commercially and critically, eventually earning a Grammy Award nomination for "Best Electronic/Dance Album" in early 2008. Carah Faye Charnow left the lineup later that year, claiming that the group's male members had booted her out, while veteran vocalist Sisely Treasure (a former member of Cooler Kids, as well as a finalist on the first season of the Pussycat Dolls' reality show) was enlisted to replace her. In November 2008, with the new lineup intact, Shiny Toy Guns released its second album, Season of Poison. A remix album that featured reworked versions by Boys Noize and Gabriel & Dresden titled Girls Le Disko: The Remixes was released as a stopgap between studio albums in 2010. Soon after, it was announced that second vocalist Sisely Treasure was leaving to pursue solo endeavors, and the group reverted back to their original lineup with Carah Faye Charnow for 2012’s III, Shiny Toy Guns' most mainstream sounding album to date. ~ Rob Theakston, Rovi