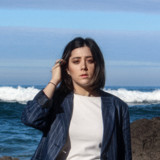 Born in a Spanish fisherman’s town, the young songwriter grew up surrounded country music which has helped shape her current sound. Pulling inspiration from Taylor Swift’s melodic storytelling, mixed up with Lewis Capaldi’s emotive pop influence and Sia’s raspy vocals, Leire’s sound is ever evolving and grows stronger with every release. Leire’s career was kickstarted whilst busking in Leicester Square. Her raspy, emotive vocals caught the eye of the right people and brought her all the way to sharing the stage with Tom Walker, Rag’n’Bone Man, Gang of Youths, Jake Bugg and Travis for The Worlds Big Sleep Out. Her latest release ‘Hator Hator’ saw immense support from Spotify, with a multitude of Spotify Editorial Playlists. Leire’s first EP will be released in April 2021, where she will put together songs that “tell the truth about society”.