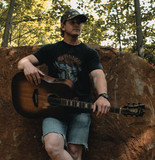 Since Connor was a young boy, he’s been listening to country radio, yearning to hear his songs screeching through the speakers. His love for country music fully solidified in middle school, thanks to a song by Alan Jackson. After this, he began writing his own melodies, lyrics, and songs. Songwriting became an immediate love for Connor and it only grew stronger after his graduation from high school. Once Connor made himself comfortable with his musical ability, he began teaching himself guitar and expanding his knowledge/skill set. He then took a step towards professionalism by constructing his own recording studio and began to record his songs. Fueled by passion, Connor wanted a standalone space in which to create music with his friends. Often partnered with modern-pop artist Jake Puliti, Connor actively writes, records, and releases concept albums based upon themes heavily influencing his life at the time. His debut album “Westward Expansion” was released in late 2019 and carried a soul-searching motif throughout the project. Connor is looking to solidify his following and step up his music with the release of his second full-length album “Otherside of 21” on June 25th.