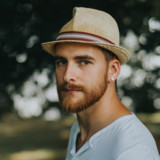 Michael Lane releases the life-affirming indie folk single "Fire in the Night" on July 23rd. "After I got out of the army, a group of friends and I went hiking and camping in the smokey mountains. I remember how amazing it was, out in nature, in the middle of this beautiful gorge. Fire in the night is a kind of tribute to that time. Being in the army was being in a prison, and getting out and going camping was the escape. I remember how we made masks from tree bark and danced around the campfire at night, dancing, singing and sharing a bottle of merlot, ill never forget it! We are the light in the darkness, no job or status defines who we truly are." - Michael Lane Successes such as two top 50 songs in the German charts, four albums, international tours and the single "Liberty" as the official song of the Four Hills Tournament 2015/2016 made the German-American famous. In addition to his work as a musician, Michael Lane is currently also active as a songwriter for Production Music and as a music producer in his remote "Studio Waldblick".