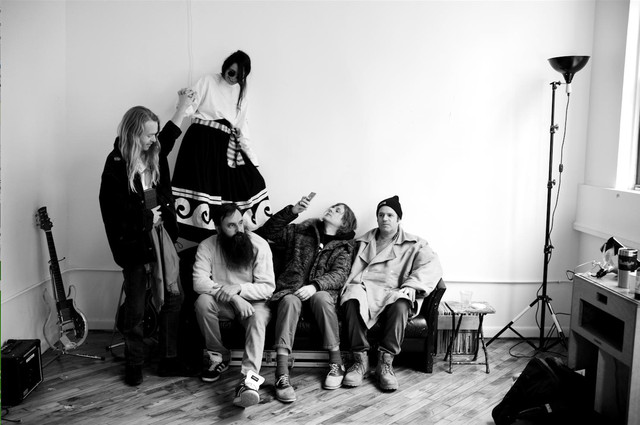 A band with a boundary-breaking yet instantly recognizable sound, Gang Gang Dance are among the most pioneering acts of the 2000s and 2010s. Their free-flowing style -- which swirls together psych-rock, ambient electronics, hip-hop, and elements of Indian, Middle Eastern, Arabic, Asian, and African music along with Lizzi Bougatsos' ethereal vocals -- is rooted in the bandmembers' past work in Washington, D.C. and New York City's experimental music and noise scenes, but becomes harder to classify with each album. With 2008's Saint Dymphna, Gang Gang Dance moved away from their earlier percussion-heavy sound and toward a futuristic pop approach that informed later releases such as 2011's acclaimed Eye Contact and 2018's Kazuashita. Prior to Gang Gang Dance's official formation in 2001, the band's members worked together on other projects. Keyboardist/visual artist Brian DeGraw and founding drummer Tim DeWitt met in Washington, D.C. in 1993 and played together in the experimental act the Cranium. While touring with the band, DeGraw and DeWitt met future GGD vocalist Lizzi Bougatsos, frontwoman of the New York band Russia. The Cranium broke up soon after the release of their 1998 album, A New Music for a New Kitchen, and DeGraw and DeWitt moved to New York City. It was there that their paths crossed with guitarist Josh Diamond, a onetime member of Jackie-O Motherfucker and film director Harmony Korine's experimental project SSAB Songs. Diamond, DeGraw, and DeWitt then formed the group Death and Dying, which became Gang Gang Dance with the addition of Bougatsos and singer Nathan Maddox. When Maddox died in 2002 after being struck by lightning, Gang Gang Dance continued as a four-piece. In 2004, the band issued its self-titled debut album on Fusetron. After signing to the Social Registry, they released the 2004 compilation Revival of the Shittest and their sophomore album, God's Money -- which featured the Eastern scales, dub atmospheres, and soaring vocals that became the band's hallmarks -- in 2005. They then issued a string of short releases that included 2005's Hillulah EP and 2007's Rawwar and Retina Riddim EPs. The following year, Gang Gang Dance led the Brooklyn performance of the Boredoms' 88BoaDrum, an 88-minute composition for 88 drummers that was staged on August 8, 2008. A month later, the band released its fourth album, Saint Dymphna, which added more structure as well as pop, grime, and dubstep elements. When the band finished touring in support of the album, DeWitt left Gang Gang Dance, with Jesse Lee stepping in behind the drum kit. In 2010, Gang Gang Dance released the limited-edition EP Kamakura via Latitudes and signed with 4AD. Their first album for the label, 2011's Eye Contact, earned acclaim for its mix of pop traditions from Asia, India, and the Middle East and the band's edgy, rough-and-ready electronic signature sound. Following the album's release, the band's members took time to work on individual projects. DeGraw worked on his visual art and released a solo album, 2013's SUM/ONE, as bEEdEEgEE. Bougatsos also worked on her art career, played with her all-female band I.U.D. and contributed to There Will Never Be Silence, a tribute album to John Cage's "4'33," released by MOMA PS1 Records. Meanwhile, Diamond recorded music on his own and also played his first solo shows. The trio made its next album, Kazuashita, with drummer Ryan Sawyer and co-producer and mixer Jorge Elbrecht. A flowing set of songs informed by new age music as well as Gang Gang Dance's other wide-ranging influences, Kazuashita appeared in June 2018. ~ Heather Phares, Rovi