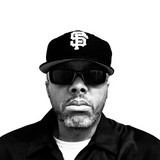 Paris hails from the San Francisco Bay Area and was catapulted onto the national hip-hop scene in 1990 with his hit single and album 'The Devil Made Me Do It,' after earning a degree in economics from the University of California at Davis. Originally signed to Tommy Boy Records, he chose the political direction he wanted his music to go in after becoming steeped in Black Panther Party and Nation of Islam ideology while in college. Paris has released multiple solo albums - 'The Devil Made Me Do It,' 'Sleeping with the Enemy,' 'Guerrilla Funk,' 'Sonic Jihad,' 'Acid Reflex' & 'Pistol Politics.'

His latest album, 'Safe Space Invader,' was released globally on September 25, 2020. His Guerrilla Funk imprint has released numerous projects, including the Paris-written and produced collaboration with Public Enemy, Rebirth of a Nation. Additional releases include Paris-produced material and contributions by George Clinton, E-40, The Coup,