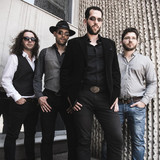 The Butchers was founded in 2011 by András Hushegyi in a small town called Šamorín (Slovakia), and started as a blues rock cover band. It didn't take long and the band started to write their songs. In 2013 the band released their first album Train to freedom, which carted lot of opportunities for them. In 2015 the band recorded and released their self titled album. After this release a 5 year constant gigging took place, they played many shows at home and also abroad (Hungary, Czech Republic, Poland etc.) In 2019 the band started the preparation for new recording. In May 2020 released a much heavier sounding EP called WOUNDS. In January 2021 the band will release a second EP called HOPE with more classic rock style songs. The main sound of The Butchers is based on the guitar playing of two brothers (twins) András and János Hushegyi