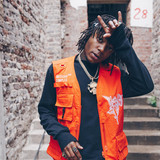 Born and raised in East Atlanta, J.I.D -- a name adopted and adapted from what his grandmother called him as a jittery child -- first appeared on the Atlanta hip-hop scene with his debut EP, Dicaprio, in 2015. Growing up, J.I.D's first connection with music was through his parents' collection of classic funk and soul LPs. After a stint at Hampton University playing football, J.I.D also hooked up with fellow MCs as part of the Spillage Village collective. By 2012, he had dropped out of college to focus on music, and in 2014 he headed out on what would be a productive tour with EARTHGANG, Bas, and Ab-Soul. Touring allowed J.I.D to craft his skills, and a year later he recorded and dropped the Dicaprio EP, which saw him team up with a host of producers, as well as EARTHGANG. While keen to distance himself from the generic abrasive trap sound that had dominated the Atlanta scene, J.I.D wanted to deliver something that was more than just about a beat, and instead focused his time and effort on lyrics as well. In 2016, J.I.D, alongside the rest of the Spillage Village crew, released the album Bears Like This Too Much, which saw the rapper honing his unique delivery and inspired lyrics. In 2017, he announced that he had signed to J. Cole's spotify:search:label%3A%22Dreamville%22 label (a connection made with the rapper via J.I.D's part in the 2014 tour with Bas and J. Cole's friend and producer Cedric Brown), which released the single Never and full-length The Never Story at the beginning of the year. ~ Rich Wilson, Rovi