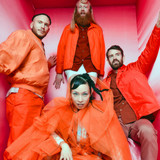 Since the release of their debut self-titled album in 2007, Gothenburg-based outfit Little Dragon have become one of the world’s most-beloved bands. Spearheaded by dynamic vocalist Yukimi Nagano, multi-instrumentalists Hakan Wirenstarnd and Fredrik Wallin on keyboards and bass respectively with drums and percussion by Erik Bodin, the group have built a well-earned reputation as one of the most consistent bands to date, unafraid to continually evolve and change their sound from record to record. From their breakout 2011 album 'Ritual Union' to last year’s ‘Season High’, via 2014’s Grammy-nominated ‘Nabuma Rubberband’, and their forthcoming ‘Lover Chanting’ EP, the band have never shied away from developing their own multi-genre space writing timeless, impeccably produced songs. Their catalogue also bursts with an enviable list of collaborations with Yukimi having lent her trademark vocals to the likes of Gorillaz, SBTRKT, BADBADNOTGOOD, Flume, De La Soul, and Kaytranada. With numerous landmark festival appearances at the likes of Glastonbury and Coachella under their belts, the band continue to take their impressively fine-tuned live show around the world, having co-headlined Los Angeles’ Hollywood Bowl with Flying Lotus this summer and with forthcoming dates at London’s Printworks and Tyler, The Creator’s ‘Camp Flog Gnaw’ festival in Los Angeles slated for later this year.