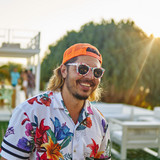 From Moldova to Miami, world is a stage that has been set for Max Vangeli’s momentous musical footsteps. Wether it be collaborating with Tiësto or playing top slots at EDC Las Vegas, Max has excelled all expectations in his accession to the high end of international dance music. His latest moves include a partnership with one of Europe’s biggest independent record labels, Armada Music, to form his own imprint NoFace Records which already released works of Laidback Luke as well as most talked about young producers Corey James and WILL K. This year Max also re-launched his weekly radio show that is now known as NoFace Radio. A weekly hour long mix covers a wide spectrum of styles and genres by artists Max looks to for inspiration on tour and in the studio. In less than a year the show can be heard in over 50 countries worldwide and had such prominent guests as DJ Chuckie and NERVO. With such a busy touring schedule, his own label and a widely popular radio show Max also finds the time to spend in the studio and his latest releases are a bright indication of the artist’s immense talent. The past year has seen him work on remixes for the likes of Calvin Harris, Major Lazer and Duke Dumont as well as release of 9 originals that gathered popular acclaim and millions of streams from fans worldwide.