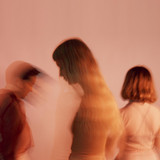 Gothenburg trio ’CHIVVY’ started out as 'The Tape' and released an EP under that name. They have been seen on stages around Europe such as in Portugal, Norway, Germany, Kosovo, Croatia and on most of Sweden's indie stages. The last year, they spent all their time in the studio recording their debut album. And now the band not only changes its name but enters a new era with a more dynamic soundscape. Their gazy dreampop is massive with a big sound and their dreamy music creates a feeling of both melancholy and hope.