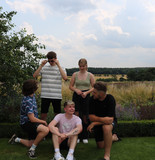 Forming in 2018, The Publics are an indie rock band from Mansfield, Nottinghamshire. Founded by Vocalist/Guitarist, Josh Porter and Lead Guitarist/songwriter, Elliot Stephenson, the band have made a name for themselves in their local area through their catchy riffs and powerful choruses.   The duo have been playing together since they met in secondary school, releasing their first single, Knight in Shining Armour (‘A Top Class Indie Banger!’ - Dean Jackson, BBC Radio Nottingham) in early 2019. Experienced drummer, James Keith, Bassist, Euan Finch and young upcoming artist, EBONY have recently joined the group, adding extra enthusiasm, character and diversity to both live performances and songwriting sessions.   The band’s latest single, Art of War, is the beginning of a bright new chapter for the group. The song is a clear demonstration of how Josh and Elliot’s songwriting skills have grown over the years, with much more mature lyrics and an emotional, whilst animated style to the instrumentals.   Art of War is the track that is likely to propel The Publics into the limelight, and help them grow their already loyal and supportive fanbase in 2021.