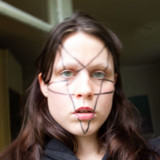 [DETENTION] forms just one part of ambitious future plans for ShitKid. The duo want to continue turning their hand to a different genre with each new release, marking a major shift away from the borderless stylistic breadth of their early releases, like the critically-acclaimed 2017 debut full-length Fish or Söderqvist’s 2016 ShitKid EP. “We’ll definitely do a pop album next,” she says, her mind already racing, “and we want to make a screamo record too!” For now, though, they are firmly rooted in the kind of pop-emo crossover that captured their imaginations in high school. [DETENTION] is defined by its earworm choruses, scuzzy guitars and, most crucially, its irresistibly bratty lyrics, from the precocious wit of the young-love chronicles ‘RoMaNcE and ‘Last Mistake’ to the brilliantly simple ‘Grown-ups are KiDS!!!’ and ‘Home Wondering (I don’t wanna go to prom)’.