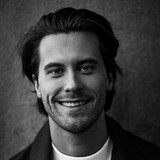 Victor Crone is 27 years old, born and raised outside Stockholm. Victor started playing guitar and writing songs at the age of 15. When he was 18 he went to LA and Nashville and wrote songs with legends like Desmond Child and Eric Brazilian. In 2015 Victor released his debut single "Burning Man”. In 2016 Victor released "Feelgood Day" that he co-wrote with Ollie Olsson and David Lindgren-Zacharias who also produced the single. In 2017 he released the singles "California" and "Sunshine and Rain". Victor also did a feat. on Tungevaag & Raabans platinum single "Coming up" that Victor co-wrote with Markus Svedin.   In 2018 he released the single “Made of” and a remix by the producer team Galavant that also is behind the band Jubel that recently had a big hit with “Dancing in the moonlight”.   Victor was the 2019:th winner of Estonian "Eesti Laul" 2019 with the song "Storm" that he wrote with Stig Rästa, Vallo Kikas and Fred Krieger. Later same year Victor Crone competed in Eurovision Song Contest in Tel Aviv. The song ”Storm” has been a great success and played on radio in several countries. Victor Crone recently released his new single: ”This Can’t Be Love” , written by the artist himself, Marcus Svedin, Richard Smitt and Andreas Moe. Victor will also compete in the annual swedish competition Melodifestivalen with the song ”Troubled Waters” in 2020.