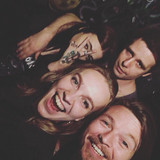 Pretty Pistol is a loud 4-piece garage punk band born in South London. After a chance encounter at a Hole gig in Birmingham back in 2010 - plus several drinks and a trashed hotel room - singer Laura Le Rox and drummer Emma Waller met up in Camden’s finest public toilet-turned-rehearsal room five years later to form Pretty Pistol with guitarist Billy Larsen and bassist Rich Cooper. Combining melds of furious shouts, frenzied riffs and pummelling drums, resulting in a marshalled chaos somewhere between Gallows, Be Your Own Pet and The Kills. The band is an unignorable presence on the London circuit supporting the likes of Penetration, KidBrother, Drones and Crazytown, to headlining and selling out London venues Birthdays and The Black Heart, which lead to them being picked as Team Rock's Band Of The Week in Feb 2018 The band's new EP ‘Welcome To The Dead Club’ will be released on 13th April 2018, recorded with renowned rock producer John Mitchell (Architects, Enter Shikari, You Me At Six) and features the singles ‘Cry Wolf’ and ‘Drive Me To The Dogs’. "This is riot music done right" - Beneath The Grid Music "Living up to their reputation they put on a chaotic and powerful show" - Vulture Hound