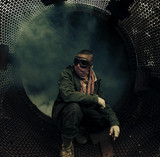 Melbourne-based Wulf Black is the rock enigma behind tracks 'Stop Me!','Wildfire' and the latest single ‘Breaking Walls’, taking the world by storm. Previously compared to Nothing But Thieves and Muse, Wulf Black is an explosive take on today’s alt rock. Incorporating elements of electronic music with enormous cinematic drums and guitars, Wulf Black has the power to transport you to a dystopian fantasy far from this world. Alongside the three massive tracks, a further two songs 'Glory' and 'Nothin' But You' were released with his debut EP July of 2019. The epic self-titled EP is officially out now on all platforms.