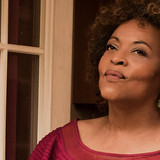 Blessed with a distinctive, flexible voice and genre-bending taste, Mississippi-born singer Cassandra Wilson is one of the best and most celebrated jazz singers of her generation. Influenced by the innovative styles of Betty Carter, Shirley Horn, and Nina Simone, Wilson emerged from Steve Coleman's M-Base Collective in the late '80s as a highly individualistic performer. Although she is an adept interpreter of the standards and blues-based jazz tradition, she's equally at home reinventing the songs of folk, pop, and country artists like Joni Mitchell, Van Morrison, Hank Williams, and the Beatles. It's an approach that has won her accolades, including Grammy Awards for 1995's New Moon Daughter and 2009's Loverly. Nonetheless, she remains deeply connected to her jazz roots, drawing upon influences such as Billie Holiday on her 2015 Lady Day tribute, Coming Forth by Day. Her virtuoso talents have also been utilized by her peers, including work with Dave Holland, the Roots, and Bill Frisell, as well as performing on Wynton Marsalis' Pulitzer Prize-winning Blood on the Fields. Along with her Grammy Awards, Wilson has also earned a Django d'Or, an Edison Music Award, and a marker on the Mississippi Blues Trail. Born in Jackson, Mississippi in 1955, Wilson grew up in a musical and education-minded family, with a father who taught music and played jazz bass and a mother who taught elementary school. Encouraged to play, she started out on the piano at age six, and by age 12 had also picked up the guitar. As a teenager, she began writing her own folk-oriented songs. She played clarinet in the band and appeared in various theater productions. After high school, she attended both Millsaps College and Jackson State University, eventually graduating with a communications degree. All the while, she pursued her music interests, singing with local cover bands, performing at coffeehouses, and developing further as a jazz vocalist. In 1981, a public affairs job at television station WDSU brought her to New Orleans. While there, she mentored with jazz elders including Ellis Marsalis, Earl Turbinton, and Alvin Batiste. Encouraged by their support, she relocated to New York City. It was during this period that she met saxophonist Steve Coleman and became the main vocalist with his innovative M-Base Collective, appearing on a handful of the group's albums. As a leader, she made her debut with 1986's Point of View, which featured Coleman, Grachan Moncur III, and other M-Base members. Several more albums followed and showcased Wilson in a similar setting. Beginning with 1993's Blue Light 'Til Dawn, Wilson shifted her creative direction, interpreting a set of acoustic, blues-oriented songs for the Blue Note label. Included were originals alongside covers of songs by Robert Johnson, Van Morrison, and Joni Mitchell. The transition worked, and she found soon found herself earning critical plaudits for her stylistically adventurous work. Her follow-up album, 1995's New Moon Daughter, took home the Grammy Award for Best Jazz Vocal Performance. Two years later, she earned yet more praise appearing on Wynton Marsalis' Pulitzer Prize-winning Blood on the Fields album. There were also notable sessions with Dave Holland, the Roots, and Jacky Terrasson. In 1999, she paid tribute to one her biggest influences, trumpeter Miles Davis, with Traveling Miles. For 2002's Belly of the Sun, Wilson continued to draw on an array of artists, covering songs by Robbie Robertson, Jimmy Webb, Antonio Carlos Jobim, and others. She also remained a fruitful composer, writing half of the songs for 2003's Glamoured. Ever willing to take new creative avenues, she deftly explored sampling and other hip-hop techniques for 2006's Thunderbird. She then returned to jazz standards for 2008's Loverly, picking up her second Grammy Award in the process. Two years later, she was back to a mix of covers and originals on Silver Pony, which also featured guest spots from Ravi Coltrane and John Legend. Ever a musical chameleon, she changed direction again with an album of mostly original tunes entitled Another Country, which she co-produced with electric guitarist Fabrizio Sotti. Recorded in Italy, New Orleans, and New York, it was released in the summer of 2012. Wilson switched labels in 2015, signing to Sony Legacy and releasing the Billie Holiday tribute Coming Forth by Day. The album was produced by Nick Launay, who is best known for working with rock acts like the Yeah Yeah Yeahs, Supergrass, and Nick Cave. She stayed active over the next few years, appearing in concert with former Hothouse Flowers vocalist Liam Ó Maonlaí and touring with her own ensemble. ~ Matt Collar, Rovi