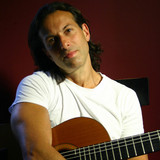 With a repertoire spanning from J.S. Bach and Domenico Scarlatti to Jimi Hendrix and Elliott Carter, Michael Nicolella is recognized as one of America's most innovative classical guitarists. He has received wide critical acclaim for his performances, recordings and compositions. Classical Guitar magazine has referred to him as “one of the contemporary guitar’s most gifted stars”; while the Washington Post stated “Since the passing of Andres Segovia the guitar world has needed an advocate... perhaps Michael Nicolella is that person.” His latest album, a 2-disc set of his guitar arrangement of the Complete Bach Cello Suites was called “a monumental achievement” by Soundboard magazine.

His previous three albums focused on contemporary music including works by Nicolella for both classical and electric guitar and orchestra. Michael has performed throughout North America, Europe and Japan, and is a frequent performer with the Seattle Symphony. He is a graduate of Yale University, Berklee College of Music and the Accademia Chigiana in Siena, Italy and is on the faculty of Cornish College of the Arts in Seattle.