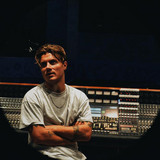 A songwriter associated with organic and lively songs interlaced with creative fingerpicking. Born in the Hague (the Netherlands) Banner picked up the guitar and independently thought himself how to play it at the age of twelve, which led to him never putting it down again. Having developed an interest in songwriting over the years, Banner enrolled for studying vocals in order to further work on his songwriting abilities. Aged 21, he wrote and released his first EP 'Over Blue' which over the years gained a near million streams. Following him playing over 60 times live, including international shows. Vulnerably and intimately, he strips the songs back to their essence during his solo shows. In contrast, the band shows fill the room with spacious and bombastic sounds but at times form an infinitesimal and quiet musical landscape where the tension is palpable in the air. Intertwining influences of musicians such as Ben Howard, Nick Mulvey with hints of the modern-pop genre. He supported fellow songwriters such as Newton Faulkner, Rhys Lewis, Villagers, Julien Barbagallo (Tame Impala) and has played in several countries, for instance: Germany, Switzerland and the United Kingdom.