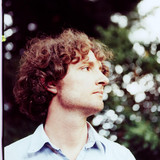 A contemporary folk musician specializing in guitar, fiddle, and banjo, Sam Amidon is known for both his original songs and his often-ambitious updates of traditional folk tunes. While he sometimes combines the two on his albums, two of his most celebrated releases, 2007's All Is Well and 2010's I See the Sign, are almost entirely comprised of folk standards (save one song by R. Kelly on the latter). At another extreme, Amidon's first album of all-original material, 2017's The Following Mountain, found him working with veteran jazz musicians to create a darker and more experimental vision. Regardless of song sources, his reliably textured, atmospheric arrangements include a singing voice that's gentle but evocative. Samuel Tear, aka Sam Amidon, began playing fiddle at the age of three. Raised by musician parents on a steady diet of Irish and Appalachian folk in Brattleboro, Vermont, Amidon spent the early part of his teens performing and recording traditional dance and avant-folk music with his parents, as well as with his own group, Assembly. He added banjo and guitar to his repertoire after relocating to New York City, where he began collaborating with longtime friend Thomas Bartlett (Doveman) and a host of other acts, such as Tall Firs, the Swell Season, and Stares. He released his debut album, Solo Fiddle, in 2003, following it in 2007 with But This Chicken Proved Falsehearted. The Valgeir Sigurðsson-produced All Is Well arrived in 2008. Amidon married singer/songwriter Beth Orton and the two eventually had children. Amidon's output remained strong as he entered into family life, with volumes arriving in the form of 2009's Fiddle and Drum, a duet with percussionist Aaron Siegel, and 2010's I See the Sign, a solo album again recorded with Sigurðsson. With production by Amidon, Bartlett, and Jerry Boys, he made his Nonesuch debut with 2013's Bright Sunny South, following it a year later with the Sigurðsson-produced Lily-O. The latter featured guitar legend Bill Frisell. In 2015, But This Chicken Proved Falsehearted was reissued in an expanded edition by Omnivore Records after being out of print for years. His first album to consist entirely of original songs, The Following Mountain arrived on Nonesuch in 2017. It was produced by Leo Abrahams (Regina Spektor, Frightened Rabbit) and featured collaborators including veteran jazz drummer Milford Graves in addition to the core group of Shahzad Ismaily, Chris Vatalaro (drums), and Sam Gendel (saxophone). When Ancienne Belgique in Brussels, Belgium presented an exhibit honoring Harry Smith's groundbreaking collection The Anthology of American Folk Music, they invited Amidon to perform a concert devoted to songs from the set. Amidon and Ismaily booked a two-day session in a London studio to record some of the songs they worked up for the event, resulting in a four-song EP, Fatal Flower Garden (A Tribute to Harry Smith), that was released in late 2019. His next full-length, the self-produced Sam Amidon, was an all-covers album that saw him return to a mostly traditional repertoire with a lineup that included the core group from The Following Mountain. It was issued on Nonesuch in late 2020. ~ James Christopher Monger & Marcy Donelson, Rovi