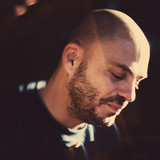 Llorca (first name Ludovic) is a composer who spent his youth in the north of france, learning music-making with computers. After releasing a couple of House music 12 inches on small labels, he signed an artist contract (using his family name as a moniker) with french label F-Communications in 1997, releasing three EP's and a LP ("Newcomer") in 2001. This album's huge success (more than 200.000 sold copies) leads him to stages around the world, touring for more than 3 years with musicians and singers, performing live in famous festivals (Montreux, Nice, Vienne, Den Haag, Les vieilles charrues) and in prestigious venues. After a compilation for Wagram ("My Playlist"), Ludovic decides to focuses on electronic music with his second project "Art Of Tones". But 15 years after "Newcomer", Llorca releases his second album "The Garden". "Funk and Soul are to 'The Garden' what jazz was to 'Newcomer' but rather than sample the classics, Llorca fashions new tunes in the style of the greats with the help of several guest vocalists, making this is very much a collection of songs rather than beats" (The Skinny, UK)