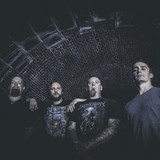 Disguise the Curse is a New England metal band formed in 2013. Their unique perspective into metal aims to capture the spirit of the genres roots, with a wide array of influences stemming from blues to death metal and classic rock all while maintaining the intensity and energy that metal is known for. In the short time since the their introduction, DTC has played countless venues across New England, including many notable festivals and has even managed to earn a spot at the mega event Rock and Shock two years in a row including a main stage performance. They have shared the stage with the likes of Hatebreed, Soulfly, Soilwork, Jasta, Shadows Fall, Within The Ruins, Dehumanized, Mobile DeathCamp, Avatar, The Rocking Dead, Battlecross, Over Kill, even former members of Megadeath and Judas Priest. 2014 brought on the release of an extremely well-received 4-track EP titled "Lord Of The Deep" which highlighted the bands unique sound and earned plenty of recognition from fans and peers alike. Since then DTC has been hard at work in the studio, promoting their sound and playing shows all across New England. With the 2017 release of their debut album "Echoes of the Dying Light" Disguise the Curse is intent on making a mark in the metal world. Disguise the Curse is all about blistering speeds with slow bluesy grooves to create a unique and daring sound. Inspired by anthems of horror including Frankenstein's monster, The Kraken, and so much more.