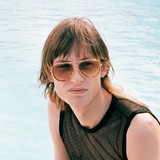 Stockholm, Sweden based HOLY aka Hannes Ferm is back with his third record Ryder, a massive step forward for the young artist. Making his debut in late 2014 with the Silver Of Your Heart EP and following it with 2015's debut album Stabs, HOLY quickly established himself as one of Scandinavia's most exciting new artists, drawing the attention of the likes of Stereogum and The Line of Best Fit, while counting Anton Newcombe of Brian Jonestown Massacre among his fans. After touring around Europe in support of the album, playing at festivals such as Liverpool Psych Fest, HOLY started working on its follow-up, the hugely ambitious three-years-in-the-making glam-psych odyssey All These Worlds Are Yours, which was released in early 2018 to acclaim from the likes of Consequence of Sound, Bandcamp Daily, Prog Magazine and The Line of Best Fit. Following the release of All These Worlds Are Yours and the subsequent touring, playing festivals like Way Out West, Eurosonic and Manchester Psych Fest, Ferm decided to take a step in the opposite direction. Teaming up with producer Jacob Haage (El Perro Del Mar) for Ryder, Ferm’s delivered an intimate synth pop record melding experimentation with conventional pop songwriting and again showcasing his ear for melodies, breaking new ground while still staying true to playfulness and immediacy that’s been HOLY’s signature from the start, as shown on early teaser tracks Hot on the Heels of Love, You shine on me (feat. Boys) and Forget about life.