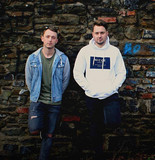 Sonickraft is the rebirth of Sean Godsall & Jon Lewis. After 10 years in the game they decided to embark on a new musical journey creating Sonickraft.   Since the transition “The Welsh wonders” (Data Transmission) have already had 3 Traxsource No.1 hits and we’re named in Traxsource’s Top 100 Tech Artists of 2019.  The duo have recently released ‘Flashbacks’ with Sonny Fodera on Solotoko. The track reached the top 5 of on the Beatport charts and has already hit over 3 million streams. The track gained massive support from the likes of Pete Tong on BBC Radio 1 aswell as support from the likes of Claptone, Jauz & Tchami in their own radio shows.   Sonickraft have previously released on CR2 Records & Glasgow Underground and have recently signed more music to Sonny Fodera’s Solotoko imprint and also on Tough Loves ‘Get Twisted Records’   Sonickraft have also had Radio and Playlist support from Ministry Of Sound, Elrow, Tomorrowland, Roger Sanchez and Steve Aoki.