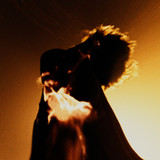 L I M is an italian artist, musician and singer from Milan. Started in early 2014 together with producer and now long-time collaborator RIVA, combining evocative spaces with existentialist and dreamy atmospheres the work of the duo eventually led to the release of L I M's debut EP 'Comet' (La Tempesta International, 2016) and ‘Higher Living’ EP (La Tempesta International, Factory Flaws, 2018). At the end of 2018 they released 'Daddy's girl' for Apple and on the occasion of Pride Month 2020, the last single of L I M '1986' was released, featuring the friend and artist Giungla. During the last years L I M took part in Populous's album 'Women' with the track 'Getting Lost' while working on M¥SS KETA's song 'Miriam' as bassist. Currently L I M and RIVA have concluded their new album, GLOWING, the first single BUBU will be released on November 26th and will be accompanied by the video directed by Giada Bossi and written together with L I M. Born from the artist's desire to tell his transformation path, will be presented on Fact Magazine on the same day. Out for the La Tempesta International, the song is accompanied by the illustration of the Korean artist JUN (@poff_hoi).