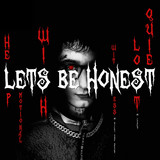 From a young age, Jay Honest's experience in life was extremely traumatic. From growing up in a broken home, at times with no water, an abusive alcoholic father, losing his first best friend at just 18 years old & his brother Matthias at the age of 23, all while fighting homelessness & addictions between the ages of 15-19, finishing high school, going to college, reaching his goals in the music industry & having his first child Jayden. Jay never had a good role model & decided his job, was to not only build a future for his family, but also be the father he never had growing up, a good one. Disposing of his childhood to chase his dreams, listening and memorizing lyrics from artists such as 2pac, Eminem & Biggie at the young age of 6, while also having an alternative rock & country music influence from his brother & mother respectively, gives jay a sort of versatility we have not seen in a very long time in the music industry! Not to mention a really interesting story that leaves us wondering how he does it all. LETS BE HONEST, the title of Jay Honest's debut album, is set to be his biggest project yet! After releasing over 40 hit singles that keep us dancing to this day, jay plans on taking his trauma and pain from over 25 years, the death of his brother Matthias, his fight for his eldest son Jayden & even his relationship with his mother and set them on stage for the world to hear! Releasing October 1st!