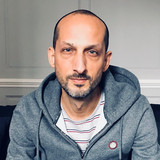 Paul McGillivray is a seasoned producer, writing and releasing for over 25 years under the moniker Bluze. He has worked within the UK Hip Hop, Drum & Bass, Dubstep and, more recently, Electronica scenes. Summer 2017 saw the release of aptly-named new EP ‘Broken Bounds’ on the UK Independent label 'Cold Hill’. The first release of his career under his own name. With this release, Paul shares the culmination of a life working with beats-based music that is now deeply integrated with his background of classical training on piano. The EP perfectly showcases Paul’s artistry in combining complex and evolving drum rhythms with synth and sub-bass, and brings forth a new form of deeply haunting, ambient, atmospheric, beats-based soundscapes for contemporary classical electronica, a combination that heralds a distinctly evolutionary development for the producer that gives much to be excited about. This is a sound that is evocative of the melodies of Nils Frahm and the sparse beats of James Blake, melded with the melancholy ambient of Boards of Canada, but it’s a sound that’s still completely unique and his own. His live shows have taken him all over the world, from performing regularly at Brighton's Cafe Expose, to prestigious club appearances from Ministry Of Sound in London to Baze in San Paolo, Brazil, and Prague alongside Fabio, and at Wilderness and Somersault Festivals as part of the Arūpa Gold project.