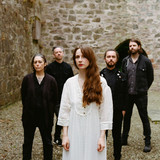 “Tony Wilson once remarked upon seeing Joy Divison live at a battle on the bands in 1978 that “every other band wanted to be on stage, Joy Divison were there because they had no fucking choice”. The same can be said for The Seed, The Vessel, The Roots And All; it exists because New Pagans had to make it. Everything here needs to be expressed.” - The Last Mixed Tape 10/10 “...not only a good debut album but also an important one.” - KKKK Kerrang! “...full of noisy, catchy indie rock with sticky pop-punk melodies and a biting punk-rock edge that never sounds anything less than urgent.” - Stereogum *Album of the Week* “...a rich, gothic tapestry of intelligent, indie-rock energy.” -

XS Noise 8/10 "Yellow Room" *Record of the Week* Steve Lamacq - BBC 6 Music Belfast band New Pagans have released their critically acclaimed debut album The Seed, The Vessel, The Roots and All, via Big Scary Monsters. Throughout their debut album, New Pagans use their creative influence to challenge past and present issues surrounding relationships, equality, history, and gender, all wrapped up in their alternative, post-punk, indie rock style. For more info: https://www.newpagans.com/ ​