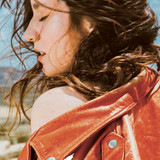 Izïa is a French rock singer who made her full-length debut in 2009 with an eponymously titled album. Born in 1990 in Paris, she is the daughter of French pop singer/songwriter Jacques Higelin, who made his solo album debut in 1971, and the sister of French pop singer/songwriter Arthur H, who made his solo album debut in 1990. Her full-length debut, released in association with the Universal Music label A/Z, peaked at number 31 on the French albums chart. The album includes songs written by Higelin in conjunction with Sébastien Hoog and Antoine Toustou, the former of whom is the guitarist in her band, whose live performances include the Printemps de Bourges festival. ~ Jason Birchmeier, Rovi