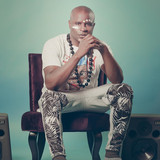 Alex Boyé is truly a multicultural, multigenerational, global artist! With over 1 billion views on his YouTube channel, Boyé’s diverse blend of African-infused pop music and vibrant dynamic visuals have captured a loyal legion of online followers turning him into a viral sensation! While his viral videos of Africanized pop covers have been featured on Jimmy Fallon, Good Morning America, Fox & Friends, Jimmy Kimmel and more; it’s his powerful voice, showmanship, personality, and uniquely arresting performance style that has placed him in a lane of his own!