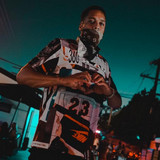 Student of the industry. Believer in giving back. JOB is a multi-faceted producer, song writer, and philanthropist from Columbus, Ohio. With multiple projects set to release this year, JOB aims to establish himself as the one-stop shop for all things music. Studying from the ground level, JOB has learned every aspect of the music game. From producing music for T.I., Ludacris and Rick Ross to touring and learning alongside Grammy-award winning producer, “Luney Tunez”, JOB has been preparing himself for this upcoming year for his multiple projects. “I want people to feel alive and motivated when listening to my music,” says JOB. Blending multiple genres and making sure his records are sonically correct JOB proves to not only have a hear for music but can create it as well. Raised in an unstable household, and being the oldest of 3 siblings, music was not JOB’s first love or priority. However, after years of surviving and doing “what he had to do”, some normalcy took root, and JOB was taken to a recording studio by a friend. “After that day, I traded in my hustle life for a music life,” says JOB. This trip to the studio would lead JOB to establishing his own record label, Blackbox Entertainment, which would then lead him to move to Atlanta and eventually his current residence in Los Angeles. Driven with an entrepreneurial spirit has kept JOB continuing to not only make strides in his career, but others as well.