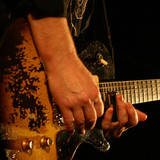 Perhaps we should let the facts speak for themselves. Barry comes from Virginia, Ireland but has travelled all over the world to play his music. He has worked extensively on the European mainland but has also toured in the US and such far away lands as Egypt! His music can be described as rock & blues with a Celtic twist! He collaborated with Davy Spillane on the critically-acclaimed CD The Peace Within. This was the birth of Celtic-Blues. Davy Spillane is the famous uilleann pipe player from Riverdance. Barry played support to Rory Gallagher on his last European tour. He headlined with Status Quo & ZZ Top at the Montereau Festival in Paris, France at a three-day festival. He also headlined the Waterpop Festival in Holland for 20,000 people. Mick Taylor (ex-Rolling Stones) was Barry’s special guest for the Beyond The Tears CD release party. Snowy White was Barry's special guest on several festivals in Europe! His version of Full Moon On Main Street won the Sheheshe Music Award in the USA. His song One Of These Days was voted one of the top six blues songs in the world by the Backas Jazz Society in Helsinki, Finland. Barry’s follow up CD to The Peace Within was Beyond The Tears, featuring special guest Mark Feltham on harmonica (ex-Rory Gallagher Band). Barry sums it up - "I grew up in a small town and dreamed that one day I'd be in a music group, travelling all over the world and reaching people through my music. It's a dream that has come true many times over!"