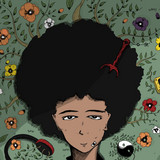 Gabriel Bero aka GentleBeatz was born on the 29th April 1996 in a small town named Moatize in Mozambique. He started making beats in 2011 as a hobby while in grade 11 but started releasing music commercially in october, 2017 with the released of his first EP called "Beatherapy, Vol. 1", which was featured in various youtube channels including neotic with almost 10 Million Views under the video title S L E E P Y and singular tracks from the ep were posted various lofi youtube channels and soundcloud mixes. It was an immense success in the lofi community. He uses music as a space of therapy to deal with his anxieties, personal struggles and to express what he cannot with words. He tries to make music which is simple, easy to listen to and which will evoke a certain emotion on the listener and He tries to add a certain personality to each song that he produces. He tries to make music which will brings us closer to ourselves. If you wanna support me