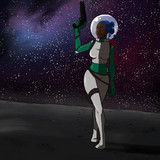 ZOOCRÜ formed amidst the thriving music and arts community of Durham, North Carolina. Common interests and experiences brought founding members Jonathan Curry, Christian Sharp and Alan Thompson together on the campus of North Carolina Central University in 2012 for early collaborations that were fruitful, musically stimulating and set the foundations for the group. Russell Favret was added in 2014, and as a complete unit the band has ascended to new musical platforms. ZOOCRÜ creates from the core belief that all American music is born from the seeds of Black music. Drawing from this rich musical legacy, ZOOCRÜ blends all popular American genres into a sound best described as Black American music. Jazz serves as the foundation, as all the members are classically trained jazz musicians, and is built upon with elements of hip hop, blues, rock and gospel. They were particularly influenced by artists such as Roy Ayers, Thelonious Monk, A Tribe Called Quest, J Dilla, Jimi Hendrix, Wu-tang Clan, Radiohead, Herbie Hancock, and Miles Davis. Infuse that with the geographic and cultural diversity that each member brings and you have the ZOOCRÜ sound. But it’s bigger than the music for this group. They are well aware of the moment they are living in and believe that it is their purpose to create art that is equal parts anthem and affirmation; sounds that heal the broken, tunes to honor the fallen and creating sonic space for all in the Crü World Order.