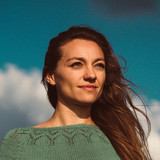 My life as it is now is partly making songs as an artist and partly as a composer for documentaries, short-film and media. It’s all about creating new music, that’s what I still enjoy the most. As a film composer I worked on a Dutch nature documentary series ‘WAD’ (about the islands of The Netherlands) by Ruben Smit, that aired on Dutch national television in April/May 2020. I worked with that same director in the past for another documentary called ‘De Schatkamer van de Veluwe’. A beautiful part of The Netherlands, close to where I grew up.

As a nature and Norway lover I recently went to an island near the city of Bodø. For one because I enjoy traveling on my own, doing things that are unplanned and sometimes impulsive. But also this trip was even better because I went to that island to get inspired and write new music. I came back with a bunch of new songs. The reason I go to such a beautiful place is that it feels like I’m in my own film, live and playing only at that moment. And with a movie comes a soundtrack. When I travel, hike or just am in nature, I always have music in my ears, to connect the music with that live film that’s playing right in front of me. So I release my music, as a film for you and everyone to see, not only my eyes. Not only playing just one time, but able to see it at any time.