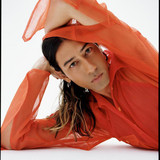 Hi, ten years ago in October, I released my first single on Moshi Moshi records. A 7" single of Swingin' Party by The Replacements. I was lucky enough to go to Paris to record my first album with Philippe Zdar. I think it was released in 2012? I have fond memories of recording it, and the more hi-fi versions we made of all my wonky demos. Thank you to Trouble Funk for lending me their song Still Smokin' - Radio for That's Alright. There's also a little sample of New York Groove on House. Otherness was released by Female Energy in October of 2014. Much love to TawiahDevonte HynesHerbie HancockFoday Musa SusoRobyn, gah, so many wonderful friends and musicians. My new record was recorded from 2016 onwards. it just came out now in September 2019, again on my own label, but this time fully self released! It's been a madness! However it's amazing to know that I own my masters... The album is dedicated to Philippe Zdar who mixed it, and who tragically passed away in June. I know he was very proud of this record, and our collaboration, as am I. Many thousands of thanks to all the collaborators on this record, of which there are too many to list. But thank you Starchild & The New Romantic, AKUA, Alexandria, Jazmine Sullivan, Bahamadia, Robyn, Samthing Soweto, Cosima, Nadia Nair, Daniel Aged, Seinabo Sey, Kelela, Byron Stingily, Ryan Ashley, Sampha, Todd Rundgren, Rob Moose, Hanna Benn, Antoine Poyeton, Mike Marsh & Parks Vincent! ❤️