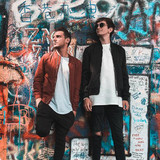 Two french boys who met on the internet a couple of years ago, grew out to one of the most leading French disc jockey’s duo. Their clean mixed tracks, fresh future house swing and soft-grindy sound made them popular all around the globe. With releases on labels such as Spinnin Records, Armada Music, Future House Music, Ministry of Sounds, Blasterjaxx own Maxximize Recordings, and Don Diablo own Hexagon Recordings, and a lot of tracks to come, the world has just seen a slightly bit of these brilliant talents.   Avoiding these guys isn’t an option anymore, as they got noticed by many top DJ’s. Supported by nobody less then artists like David Guetta, Tiësto, Martin Garrix, Dimitri Vegas & Like Mike, Don Diablo, R3HAB and Alan Walker, combined with collaborations & remixes with Breathe Carolina, Merk & Kremont, Laidback Luke, Galantis... these boys already prove what they have to offer. They now count over 150 millions streams across all platforms.   With crates of new tracks, tours all around the world and a lot of festival shows incoming (including Tomorrowland), their mix of new EDM and popular future/bass house, glitchy sounds is the prefect recipe for the next generation.