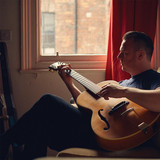 Ed Cosens is a singer, songwriter from Sheffield, U.K. His debut album 'Fortunes Favour' was released on 9th April 2021 and is available now. A creative catalyst for over a decade in Reverend And The Makers, Ed has enjoyed a rich musical life, creating hit songs and albums, playing shows across the world, without many truly understanding the significance of his influence and vision. With his debut album comes the culmination of many years honing his craft and is bursting with tremolo-rich, strings-soaked melody. Plangent chord progressions and mournful tones pair with poetic reflections on life’s twists and turns. Shades of The Beatles, Echo & The Bunnymen and Richard Hawley snake in and out. Cosens is a key – though perhaps somewhat overlooked – figure in Sheffield’s culture-changing, musical explosion of the mid 2000's and a mainstay of the Sheffield scene ever since. A scene that nurtured both ’The Makers and the likes of Arctic Monkeys. Alex Turner and Matt Helders from the latter were both members of an earlier Cosens led band. With an emotive, heart-swelling collection of songs and production to match, Cosens' debut release is an exciting beginning to an age old story. https://linktr.ee/edcosens