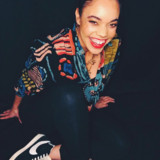 Andreya Triana is an experimental, self taught singer songwriter and MOBO nominated artist hailing from South London. Drawing inspiration from her rich multicultural background, Triana’s sound was grown from a foundation of soul, jazz and pop influences, with a voice that packs a smoky, husky powerhouse punch of female empowerment, individuality and self love. After attending the Red Bull Music Academy Australia in 2006, Andreya went on to meet,

song-write and collaborate with the likes of Bonobo, Flying lotus and Mr Scruff before signing her first deal with London based Record Label ‘Ninja Tune’ in 2010. To date Andreya has produced 3 solo studio albums ‘Lost Where I Belong', ‘Giants’ and ‘Life in colour’, and has a catalogue of collaborations, having worked with artists such as Wilkinson, Bondax, Bonobo, and many more. In 2013 she found chart success, featuring on Breach’s Top 10 single ‘Everything you never had (We had it all)’ which reached no.7 on the Official Singles Chart. Andreya's music has made appearances on television shows such as ‘Greys Anatomy, The Good Wife, Being Mary Jane' and ‘Self Made’ as well as being featured for the ‘Live XXL #GENERATIONCOLOUR’ campaign, and a spot on the ‘EA Sports FIFA 19’ soundtrack. In early 2020 Andreya went on to became a fully independent artist, now managing all facets of her career, Andreya's talents have branched out into music production, DJ-ing and the release of music through her own record label.