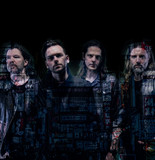 While the world has been in total standby under the COVID-19 pandemic - H.E.R.O. has been working hard on their next album - starting with the release of the single "Made to be broken". This time the band are addressing frontman Chris's past - a past that lead into a hard breakup with his religious family, and the issues of suddenly being abandoned by the people you were supposed to love the most. The single "Made to be broken" is out April 23. 2021 H.E.R.O. is a four piece rockband from Copenhagen, Denmark:   Christoffer Stjerne- Vocals/guitar Søren Itenov - Guitars Anders Kirkegaard- Drums Johan Wohlert - Bass   In 2016 H.E.R.O. released their 6 song debut EP including the hit song Dangerous  2017 saw H.E.R.O. getting critics- and media attention from around the world, and their combination between hard-hitting guitarriffs, big choruses and pop melodies has given H.E.R.O. a still increasing fanbase   In 2019 the band has toured with Slash feat Myles Kennedy and the conspirators, claimed the #1 spot on the Japanese airplay charts with the single “superpowers” and released their debut album “Humanic”. Less than a year after their debut album, danish band H.E.R.O. has released their second and most ambitious album Bad Blood - which debuted as no 1 on the sales charts in Japan.   The album points in a heavier direction, and may mark a new era of what rock music should sound like in 2020.