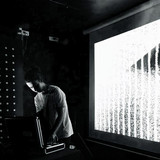 Arzac is a musical project by French electronic musician Marin Scart, born in Paris, 1998. It’s a playground for experimenting with sonic textures as well as abstract rhythms, the best of which are used as inspiration for live hardware electronic music performances. "If I were a dinosaur, I'd kill to be sent 30 million years later in order to witness this." — Sébastien Mercier "Listening to Arzac feels like rubbing your palm against sandpaper, but your palm is very itchy, so in the end it's cool." — Minecraft Berghain Guy His music takes inspiration from the simple things in life, such as bricks tumbling around in washing machines, and accidentally playing two YouTube videos at once.