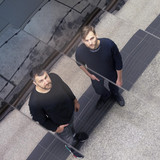 MIRRAR is a Electro/Alt-Pop duo from Nuremberg, Germany. The band was founded in 2016 by Jannis and Dorin after working together in several projects. Sharing their common taste for bands like Radiohead, Interpol and Moderat, they started working on their first songs. The creation process was fruitful and in 2017 they released their first EP, Pearl. The new work was presented in several venues throughout Germany and Austria. Ever since the release, the band continuously polished and focused their sound, slowly shifting towards a more electro setup. The pinnacle of MIRRAR came in October 2019, when they released their first album called "The Sound of Things Falling". The LP, recorded with award-winning producer Oliver Zülch, is a mix of synth soundscapes, samples and beats topped with guitars which takes you on a journey from dancy highs to tripping lows. The

release tour took them through Germany, Austria, Luxembourg and Romania, where their live sets were well received by the public in both clubs and at festivals.