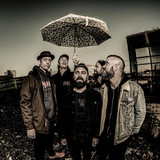 DANGERFACE is a five piece punk/hardcore act from Norway. Energetic and aggressive rock with a clear punk-hardcore nerve. It's fast, noisy, and packed with edge and catchiness! Being compared to bands like The Ghost Of A Thousand, Kvelertak, The Bronx and Gallows, one can imagine what kind of band DANGERFACE is! Words from Punknews.org: "Imagine if Cancer Bats and Orchestra Of Wolves-era Gallows had a baby, but that baby was born with innately cool scandi style. That’s what you’re dealing with in DANGERFACE", and "Razor-wire punk rock riffs wrapped up with an exuberant swagger". DANGERFACE go all-in when it comes to live-performance, to expose the energetic hard hitting beast that they are, and let their music speak through their energy as well as through the speakers. Seeing DANGERFACE play live will make you feel like rioting and partying at the same time! After releasing their critically acclaimed debut album, Get Loud!, one of the many highlights of 2019 was playing 2000 Trees Festival, England, alongside bands like Every Time I Die, Comeback Kid, Cancer Bats and Turnstile. By the end of 2019 Get Loud! was streamed 340.000 times, on Spotify alone.