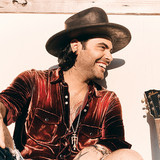 “GOOD TIME” deserved permanent ink, since the phrase is more than just an album title. It’s also a way of life for Moon, an adventurous artist, writer and musician with an enduring optimism and a flair for challenging boundaries. That attitude is apparent in the EP, a judiciously layered synthesis of his Georgia roots, pairing Atlanta-bred hip-hop and rural-fed traditional country, two genres that were considered incompatible not that long ago. When an Atlanta booking agent offered him $200 a night, and allowed him to mix his original music in with covers songs, it was a no-brainer. Moon took the gig – loved it – and fortuitously bumped into another Atlanta musician, Zac Brown, who hadn’t yet taken his band to the national level. The two began co-writing, and Moon became a regular collaborator, credited on five #1 Zac Brown Band hits: “Loving You Easy,” “Homegrown,” “Beautiful Drug” and “Keep Me In Mind”. Some of country’s prominent movers and shakers bought into Moon’s artistic story right away. Already signed to Warner/Chappell, he landed a booking deal with the Creative Artists Agency, and secured Luke Combs’ partners, Lynn Oliver-Cline and Chris Kappy, as his managers. Sony Music Nashville – his first choice for a label – signed Moon within a week of an audition in chairman/CEO Randy Goodman’s office.