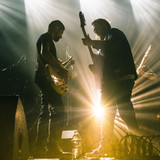 Envy On The Coast

Featuring Envy On The Coast

After a seven year hiatus, Envy On The Coast's reincarnation is now in full swing with original members Ryan Hunter (1ST VOWS) and Brian Byrne (The Hand That Wields It) at the helm and steering the band in a new direction. The Long Island-born band released their first new album, an EP titled Ritual on June 30th, 2016, via Equal Vision Records. The band announced the signing and release "Manic State Park" - a soul-piercing track taking the listener on a journey from delicate, melodic moments to aggressive, thrashing heights. The band was co-produced by Mike Sapone and Ryan Hunter.