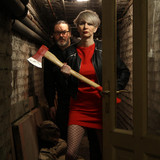 A 50ft tall women, a huge guy with glasses and a low tuned guitar, drums from the computer and basses from synthesizer hell. Post-industrial beats, stoner bass loops, metal riffs and German lyrics. Guitars can never be too loud, drum patterns never too stoic, bass runs never too gloomy and German lyrics never too hermetic. Post-Industrial-Metal. Netactivist Frank Christian Stoffel and singer Doris Mücke are now older than their shoe sizes and can still remember record players and black and white television. Nonetheless, they are not so quick to let their digital agendas take the butter off their bread. They clearly position themselves against – the surveillance mania (whether Facebook or NSA) – the excesses of neoliberal capitalism – a reverse copyright – Populism, nationalism and racism And are committed to – the protection of privacy (digital self-defence) – new forms of a social market economy – a knowledge and creative mindset – the idea of the Aufkläurng, a united Europe and a respectful and colourful coexistence For years, they have consistently released their albums under a “Free Culture License”, the Creative Commons BY-SA License. Because FC Stoffel and Doris Mücke would rather be part of the solution than part of the problem. Self-assertion instead of therapy. Occasionally, their performances can also lead to panel discussions on the above-mentioned topics. But they always try to keep it short.